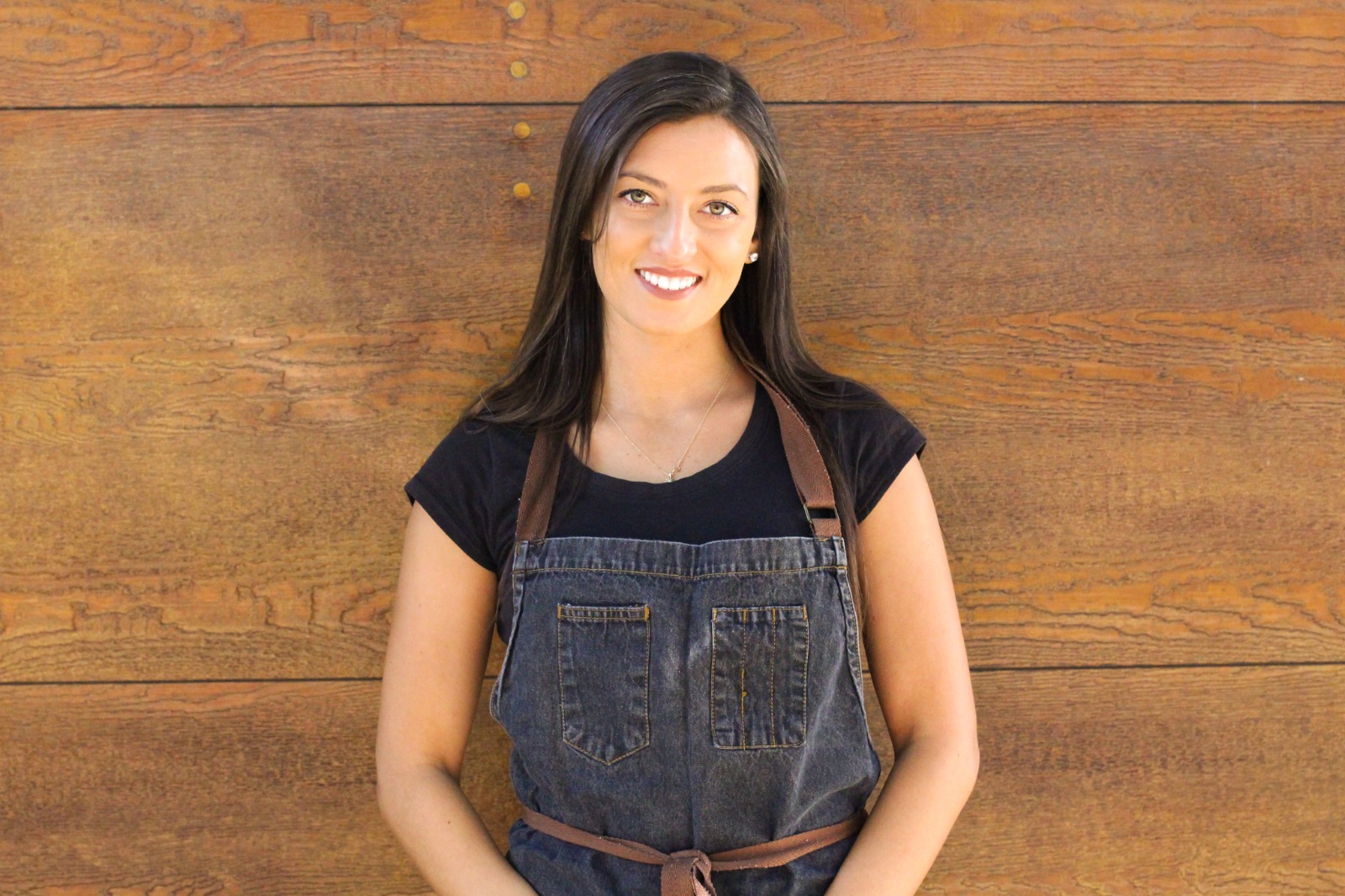 The Passion for Food Begins.

Erika’s childhood kitchen experiments consisted of stuffing hot dogs with loads of spices and “inventing” microwaved grilled cheese. Sure, maybe it was a little soggy, but good thing her sister Alexa didn’t mind being the world-renowned taste-tester.

Erika, a Kansas city native, knew she had an interest in food since she was just a wee one. All she wanted for Christmas and her birthday were things like plastic food toys and Easy-Bake Ovens. Instead of watching popular cartoons and television shows like the Teletubbies, Erika was more interested in the food channel and experimenting in the kitchen.

During Jr. high school, she exhausted all her electives with every cooking class offered. She also excelled in gym class and can throw a mad spiral! If you’re wondering, she’s a diehard Chiefs fan.

Erika went to Olathe South High School, but anxiously awaited the day she could enrol in the Olathe North Culinary Program. She was fortunate enough to be accepted into the program her senior year and quickly found that it was like training boot camp for cooking. She studied and practised for all her cooking finals religiously because all she wanted was to succeed at an exponential level.

Her instructor, Chef Mike, took notice of Erika and put her on the yearly ProStart culinary competition team. Think of an intense culinary competition like the Bocuse D’or, but for high school students. They competed against 17 other ProStart teams in Wichita, KS and placed first. They qualified for nationals in Baltimore, MD and went through another high-stress month of practice before heading off to compete for the national title.

Erika’s team placed first in the nation, still holding the highest score in national history. It still remains one of the best days of her life.

Erika was rewarded with scholarships and free-rides to culinary schools across the nation. She settled on the small student-to-teacher ratio at New England Culinary Institute, nestled in the quaint town of Montpelier, VT. She fell in love with the mountainous Northeast, high-quality creameries, easily-foraged woods and the norm of living a sustainable lifestyle.

Experience is the teacher of all things.

Erika headed to her first internship in New Orleans, LA, home of the Cafe Du Monde beignets and momma’s comfort cajun food. She worked at Domenica (then run by James Beard award-winning Chef Alon Shaya), a modern rustic Italian restaurant specializing in charcuterie, handmade pasta, and pizzas made from a rotating brick oven imported from Parma, Italy. It’s still the best pizza Erika’s ever had to this day (and she’s lived in NYC!).

Erika moved back to Vermont to finish her residency, but her eyes were hungry and set on the Big Apple. She fell in love with the beauty and simplicity of Eleven Madison Park’s plating, inventive cooking techniques and flavor profiles. Before making the final decision to work at EMP, Erika staged at all the 3-Michelin star restaurants in NYC; Per Se, Daniel, Jean-Georges and Le Bernardin. She had a difficult decision to make after being offered every position, but Erika found that her heart was still set on EMP.

Growth is not found in comfort.

Erika worked as a commis for a couple of months before being promoted to Garde Manger, where she worked for many more months. She then had the unique opportunity to be the recipe tester for, Eleven Madison Park: The Next Chapter cookbook, released in 2019. She meticulously tested every recipe to the exact gram and was involved in all the cookbook photoshoots.

Erika learned an immense amount and credits EMP for helping to polish her work ethic, keen attention to detail and creative but simplistic approach to fine-dining food.

After a year and a half, Erika headed back to Kansas City to be with her family for an undetermined amount of time. In KC, she worked for a few catering companies and still found a void in her heart. Erika’s love for NYC came back burning stronger than ever before.

She decided to move back but wanted to try something new before jumping back into the prestigious Michelin lifestyle. She chose to study the world of craft-coffee eager to learn a new skill. She worked at Irving Farm Coffee Roasters in Greenwich Village for a year while also pursuing hobbies like acting and photography.

Erika learned how to dial in espresso and make the perfect shot based on time, temperature, pressure and the flavor of the beans. She participated in several coffee cupping sessions where she gained an understanding of coffee’s depth of flavor and how it’s just as complex as wine, if not more.

Try and fail, but never fail to try!

After coffee, Erika continued to seek more in her life. She could either go back to cooking alongside her peers or take the road less traveled. Erika’s burning desire to own her own business persisted. She began the process of many business endeavors, but found that they fell short.

She realized it was from 3 major things:

From in-home private dinners to culinary workshops, to consumer packaged goods, to catering services and many food truck concepts; Erika has learned a lot.

She will continue to seek opportunities that light her soul on fire and FOODSPLAINER is the start of that.

You may be asking yourself, “why is Erika podcasting?”

Sounds like she could be leading pioneering efforts at a fancy restaurant or building her own.

Restaurant ownership used to be Erika’s dream. And if that happens in the future, then so be it. But she realized one doesn’t have to own the best restaurant in the world to reach people from all over the world and make a positive impact in their lives. Her viewpoint has evolved and grown into much more than that.

Foodsplainer is not just a podcast, but a movement to help you:

…But most importantly, FOODSPLAINER was built to help you educate and empower yourself to accomplish the unknown inside of you. That’s why Erika is Foodsplainin’.

How Erika feels when people ask her what her favorite ‘anything’ is?

Erika simply does not have favorites. It’s like asking her to choose a favorite child (although she has none). Her favorite cheese, or dish to make, or this, or that changes constantly. It’s based on mood, exposure, and education. We are ever-changing, ever-evolving creatures whose favorite things simply change. She used to despise mushrooms and cheese, then her palate learned that they are some of the most flavorful foods on earth. She couldn’t possibly choose a favorite cheese or mushroom, there are too many beautiful variations that deserve their own time and place.

If Erika was stranded on a deserted island and could only bring 4 kitchen tools, what would she bring?

A Kunz spoon, fish spat, tweezers or tongs and a Chef knife.

How does Erika feel about milk?

She thinks cow’s milk tastes nasty and remembers not being able to leave the dinner table as a child without finishing her milk. She would have to plug her nose and think of anything but milk to be able to chug it down without gagging. So...oat it is. Oat is her favorite.

A nice dry glass of Insignia or a dry Nebbiolo. She likes it as dry as the desert. The more astringent, the better.

Does Erika have a sweet tooth?

Erika is the type of person who has to finish with a salty chip after eating something sweet. Her body does crave sweet indulgences at times, but she’s found that happens when her body is telling her that her blood sugar could use a boost. Common beverages like pop and sweetened teas throw Erika off her rocker with how sweet they are.

Do you prefer spicy or mild?

Spicy all the way. Make my insides burn.

Join our subscribers list to get the latest news, updates and special offers delivered directly to your inbox